It also includes some suburbs which are part of the Moreton Bay Regional Council area, such as Ferny Hills and Eatons Hill. This is because the Ferny Grove rail line and Brisbane Transport provide public transport services in these areas.

This region is based on the Moreton Bay Regional Council boundary and includes Bribie Island, Redcliffe and Caboolture.

Some suburbs, such as Ferny Hills and Eatons Hill, are part of the Greater Brisbane region.

This region is based on the Redland City Council area and covers Capalaba, Cleveland, Redland Bay and Victoria Point.

This region has strong links to areas in Brisbane City—including Brisbane CBD, Carindale, Garden City, Wynnum and Manly—and Logan Hyperdome and Beenleigh in the southern region.

This region is based on the urban areas within the Ipswich local government boundary, including Goodna, Springfield, Ripley, Ipswich, Rosewood and Helidon.

This region is defined by the Sunshine Coast Regional Council boundary and includes the urban areas of Caloundra, Maroochydore, Noosa, Landsborough, Nambour and Cooroy.

This region is based on the urban areas of Gold Coast City. It stretches south to Coolangatta, west to Nerang, and north to the developing areas of Coomera and Ormeau.

The urban areas around Beenleigh are included in southern region.

This region is defined by the Cairns Regional Council area and stretches from Palm Cove in the north, south to Gordonvale, west to Redlynch, and incorporates Cairns City and surrounding suburbs.

qconnect is a Queensland Government initiative providing improved public transport and greater connectivity and accessibility of services throughout regional, rural and remote Queensland.

In addition to qconnect bus services, there is a range of options for getting around towns in Queensland, including accessible taxis and long distance services.

The Department of Transport and Main Roads has declared a service contract is required to provide certain types of public passenger services for specified areas and lines of route. 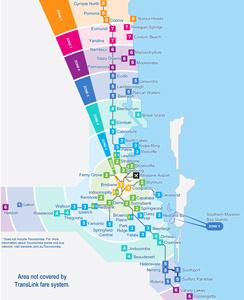